Configure AsmSpy as an external tool in Visual Studio

AsmSpy is a tool I wrote a few years ago to view assembly version conflicts. Despite the fact that it started as a single page of code command line application, it’s been one of my more successful open source efforts. I still use it all the time, especially now with the ‘forking’ of .NET into Framework and Core and spreading use of dotnet standard, both good things IMHO, but not without the occasional assembly version head scratcher.

Today I want to show how easy it is to integrate AsmSpy into Visual Studio as an ‘external tool’.

First download AsmSpy from the GitHub repository. If you download the zip file, you’ll see that it’s merely a stand alone exe that you can run from the command line.

In VS select External Tools from the ‘Tools’ menu. 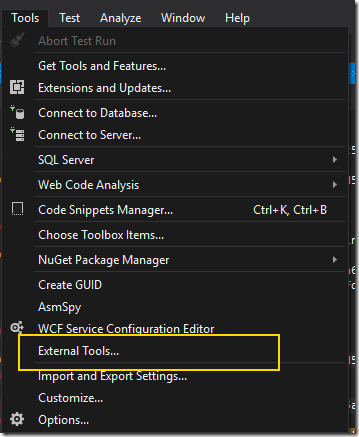 Now configure AsmSpy as follows:
Title: AsmSpy
Command: The path to where you’ve put the AsmSpy.exe file.
Arguments: $(BinDir)  - this points AsmSpy at the output directory of the currently selected project.
Initial Directory: $(ProjectDir)
Use Output Window: checked. – this ensures that the output from AsmSpy will go to Visual Studio’s output window. 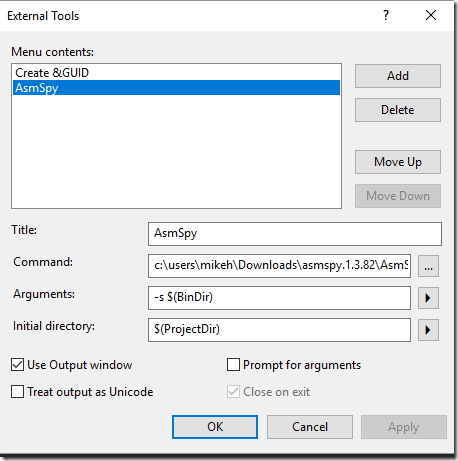 Now you can select a project in Solution Explorer and go to Tools –> AsmSpy. AsmSpy will run against the build output of your project and you can view Assembly version conflicts in the Visual Studio output window.