I’m on a sales drive. I want to move away from daily-rate contracting, and focus on full-lifecycle project delivery. I’ve created a new website to help market myself http://mikehadlow.com/. I’m looking for customers who want software written to a specification for a fixed price. 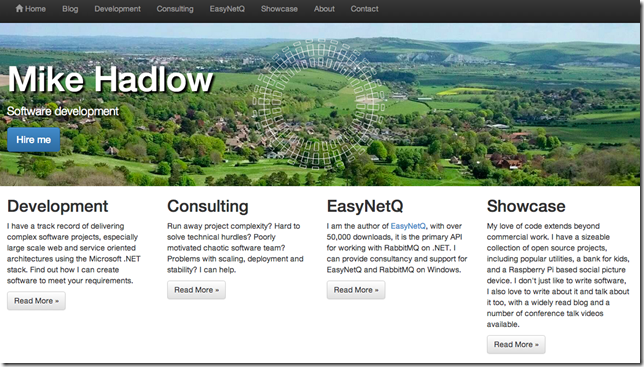 I’ve been working in IT since 1996, although I’ve played with computers and programming since I was a teenager. Except for the first two years when I had a permanent job, I’ve worked as a daily or hourly rate contractor, with just the occasional foray into fixed-price project work. Looking at my CV I can count 17 different organizations that  I’ve worked for during that time. Some of them where large companies where I was just a small part of a large team. For example, I was one of over a hundred contractors at one particular public sector project. Others were tiny local Brighton companies where I was often the end-to-end developer for a complete system. I’ve had a variety of roles, from being a travelling troubleshooter, driving around the country fixing installs of one particularly nasty system, a bug-fixer for months on end on a huge mission critical system, and a plug-n-play C# programmer on a whole range of different projects. More recently, for the last five years or so, I’ve mostly been hired in an ‘architect’ role. What this means is somewhat vague, but it usually encompasses giving higher-level strategic design direction and getting involved in team structure, process design, and planning. All this experience has given me some very strong opinions about what makes a successful software project. I hope that’s pretty obvious to anyone reading this blog. It’s also given me the confidence to take responsibility for the entire project lifecycle.

During this time I’ve also occasionally done fixed-price projects. The largest of these was a customer relationship management system for a pharmaceutical company, this was a six month project which I worked with a DBA to deliver. I’ve also built a property management system for a legal practice, and a complete eCommerce system that I’ve also maintained for the last six years. I always enjoyed these projects the most. It’s very satisfying to be able to deliver a working system to a client and see it really helping their business. The problem has been finding the work. I’m hoping now that the popularity of this blog and the success of EasyNetQ will provide enough of an audience for me that I’ll be able to do projects full time.

I want to move from being just an element of a project’s delivery, to being the person responsible for it.  Taking responsibility means delivering to a price and time-scale and creating and managing the team that does it. So if you have a requirement for bespoke software and you need a safe pair of hands to deliver it, please get in touch with me at mike@suteki.co.uk and let’s talk.